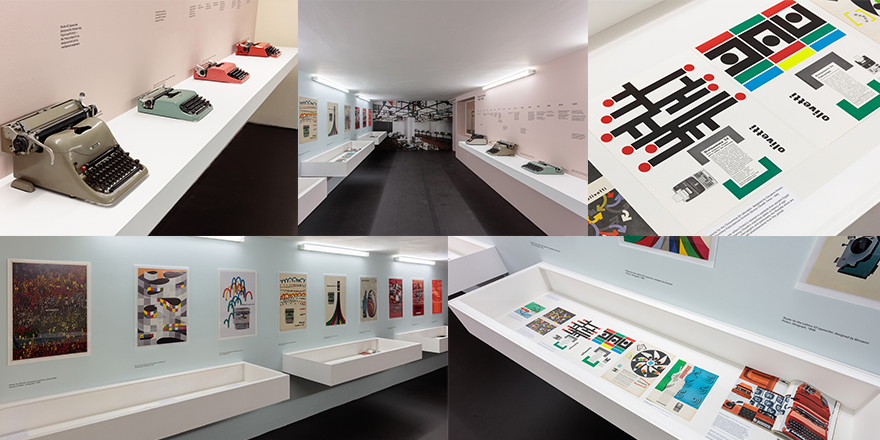 Olivetti: Beyond Form and Function is the latest exhibition to open at the ICA. Arts Thread went along to find out more.

One of the first impressions to greet you, as you enter the Fox Reading Room, is the colour and vibrancy of this intimate look at the post-war rise of Olivetti. Delightfully curated by Juliette Desorgues and in collaboration with Associazione Archivio Storico Olivetti, Ivrea – Italy, the exhibition explores how Olivetti’s philosophy to innovative design did not stop with the products alone but continued through to extremely inventive communications demonstrated by their approach to advertising, promotion, architecture and interior design.

On display are early models of Olivetti typewriters including a 1963 Lettera 32 in salmon pink, designed by Marcello Nizzoli and the Valentine designed in 1969. Even looking through today’s 21st Century eyes the Valentine, in particular, has the aura of the ‘must have’ tech product of its day.

But what really excites in this exhibition is the graphic design, artwork and architectural images on display.

Olivetti created a graphic design department in 1937, headed by Giovanni Pintori, with the task of blending product design with advertising and promotional campaigns. As a result we are treated to Olivetti posters, designed by Pintori and Herbert Bayer in the late 1940’s and early 1950’s, which deliberately overlook the use of product shots in favour of graphics, typography and colour. These are works of art but it still must have been a brave move to produce marketing posters that display no pictorial reference to the product you are selling.

This attitude toward creative marketing is also borne out in the advertising campaigns designed by Pintori. These show a bold use of primary colour and graphics with the products themselves often shown in black and white and quite small in proportion to the size of the advert. We were particularly struck by the advertising for the Divisumma 24, which demonstrates Pintori’s interest in ancient symbols.

Olivetti’s philosophy to innovation can also be seen in the showrooms created during this post-war period. The New York showroom, opened in 1954 and designed by Italian firm BBPR, was intentionally devised to be a striking piece of architecture and interior design. The showroom included a large moving display wheel, pink and green marble, murals and demonstration machines with which the passer-by could interact.

The exhibition also includes an Educators Tour, Gallery Tour and panel discussions and is part of the London Festival of Architecture 2016. For further details please visit www.ica.org.uk

The exhibition runs until 17th July 2016

This review was first published for Arts Thread 27th May 2016

The boys have a new track out today #thetippingpoi

Having a vinyl revival day... 1983 #vinylcollectio

From mock-up, through artwork to final printed pro

Willy Lott’s cottage from Flatford Mill as per C

What with restaurants, bars and cafes reopening we

Fridays are #lockdownbaking days. Before and after

Feels like a very small victory, but this is the f

Our roses are in full bloom #lockdowngarden #flowe

PE was cancelled due to wet pitch so we baked chee

The relief at finally sorting a food box delivery

The show must go on. Ballet lessons with @meribart

By continuing to use the site, you agree to the use of cookies. more information